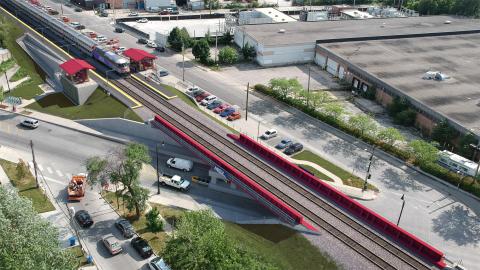 Metra and local officials, including Metra Chair Romayne C. Brown and Ald. James Gardiner (45th), today broke ground on a $36.1 million project to replace a 122-year-old railroad bridge over Milwaukee Avenue on the North Side of Chicago and reconstruct the adjacent Grayland Station.

The bridge that carries the Milwaukee District North Line over Milwaukee Avenue near Kilbourne Avenue was built in 1899. It will be replaced with a new bridge with new abutments. Grayland Station, just south of the bridge, will be rebuilt with longer platforms, new public address equipment, visual information signs, shelters with on-demand heat on each side, new lighting and new stairs and ramps, making it fully ADA-compliant.

“This bridge is used by dozens of Metra, Amtrak and freight trains every day, and it must be replaced to ensure that service can continue uninterrupted,” said Metra CEO/Executive Director Jim Derwinski. “While we are replacing the bridge, we also will create a more welcoming, comfortable and ADA-compliant station for the community’s My Metra riders.”

“Our Old Irving community is thrilled to witness a new bridge being built at the Metra Grayland Station to enhance community safety, while creating a more inviting environment,” Ald. Gardiner said. “The 45th Ward is excited to partner with Metra to bring the very best in services that our community deserves.”

The new bridge will improve operations and reliability by reducing delays associated with slow zones, track closures or trains canceled for maintenance and repair work on the existing bridge.  To reduce service disruptions, maintain the current bridge location and speed the project, a temporary two-track bridge will be used during the construction. In addition, a temporary Grayland Station, south of the current station, will be used to continue service to the area during the project.

Replacing the aging bridge is critical because it provides a vital link in the regional and national rail network. If it were to be taken out of service, there would be no viable alternate route. Before the COVID-19 pandemic, the bridge was used by 61 Metra trains, 17 Amtrak trains and several Canadian Pacific and Wisconsin Southern freight trains each weekday.